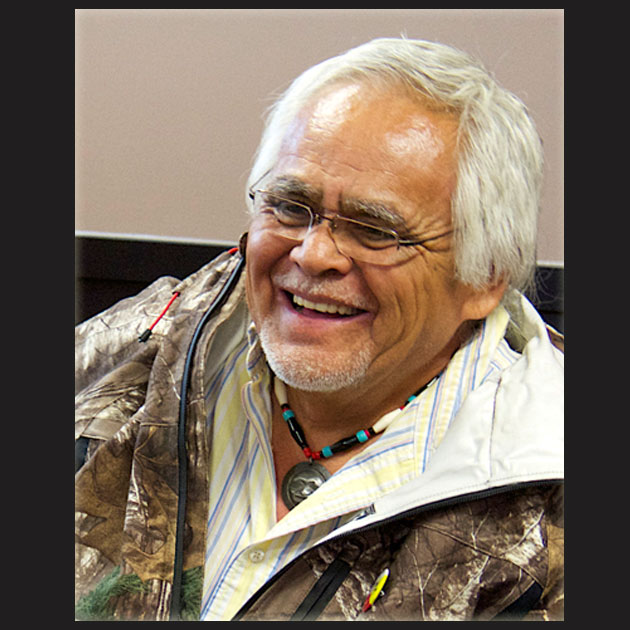 Dave Matilpi’s art is featured in the card, Wolf – Guardian Spirit. Here is his full bio, followed by his interpretation of his painting, transcribed from an interview at Java Domain in Peace River, AB in August 2016.

Dave Matilpi was born January 21, 1953 in Alert Bay, B.C. into the Nimpkish Band and the Kwakiuth First Nation.
Early in life, Dave attended St. Michael’s Residential School in Alert Bay, leaving his language, pride, respect and identity behind. Like many other residential school survivors, Dave suffered unspeakable abuses in the residential school system. He also contracted tuberculosis, which is now, thankfully, dormant.
Years later, Dave found himself on East Hasting Street, which had become a gathering place for many survivors of Residential schools. They were comfortable and accepted each other there in the familiarity they shared in lost identities and their broken English.
Dave’s Grandmother found him when he was about 17 years old. She brought him home and he began a new transition. He built the skills to get and hold a job and move forward into a new life.
The first painting Dave produced was a healing piece on his time in residential school and on East Hastings street. It depicts much of the struggle for self and identity while conveying the confusion, pain and loss he was experiencing then.
Later, as an adult, and after a work injury, he decided to go back to school to get his Grade 12 diploma. He graduated in 1994 receiving Most Improved Student, and several other leadership awards. His career debut was working with a budding program with the Northern Mamawopwim Society as an early intervention worker, using his Aboriginal perspectives.
Dave began to delve deeper into his art and aboriginal roots to help youth at risk, while uncovering grey areas in our schools, courts, and child welfare systems. He began to realize how his past experiences – his story – lent beneficial tools to his work within his communities.
As Dave immersed himself in the world of youth intervention, he reached out in every direction seeking and learning Aboriginal perspective and protocols. He met Elders,  participated in sweat lodges and other ceremonies, and pursued knowledge and teachings from other gifted cultural people. He learned the value of using our personal life journeys with the medicine wheel to seek purpose of life and fulfill our own holistic path. 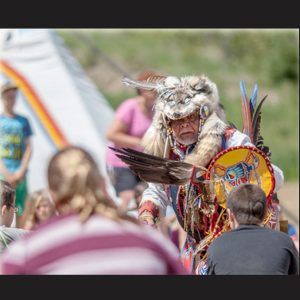 Dave is also a celebrated traditional dancer and dance instructor. He has participated in many Pow-Wow dances across the province as well as performed at countless traditional and non-traditional functions. Often he is accompanied by his daughter and some of his grandchildren who carry on the tradition of dance.
Now, as an Elder himself, Dave uses the medicine wheel for various teachings and has worked under several flags with the gifts of his people. His art, whether carvings, paintings or drawings, often includes some aspect of the medicine wheel. He holds great value in balance within the mind, body, emotions, and spirit. This has provided a direct yet subtle approach to bringing equilibrium to many of the imbalances in his life and work. He sees our time as seasonal and every day a part of a season as we work as medicine people, fire keepers, bundle carriers, artists, storytellers, using whatever gifts we carry.
From the experiences and lessons he has gathered, personally and professionally, Dave has developed a workshop called Broken Journey, where he guides participants through a blame-free reflection of the ripple effect of the residential school system, which still moves through our communities and families. Dave is also a certified instructor for the I Am a Kind Man program.
Dave has been Elder in Residence with the Sagitawa Friendship Centre and continues to work with Youth and their families through various community programs such as the Peace River Outreach Campus and with K-Division with the RCMP. He resides in the Peace River Valley with his wife, Darlene. They are surrounded by family and friends in a vibrant community that greatly appreciates their family’s presence and contributions.

The painting: Lodge of the Ancestors
In the spirit world, the yellow teepee is the lodge of the ancestors.
The medicine wheel (in front of the teepee) has two interpretations. One relates to the Cycle of Life. Red is birth, black is youth or teenagers, white is adults, and yellow is the aged ones or elders, giving back the teachings. The stars represent ancestors that have gone on.
From the ancestors lodge the Eagle carries our prayers to the Creator. I do a prayer for my grandmother and grandfather to come back into my mind when I’m speaking so I don’t have to write down a script and I’ll be able to talk freely.
That’s the way our teachings are. There’s a connection, a cycle, with oral teachings from the ancestors, to the eagle and back down to the lodge.
The medicine wheel also represents holistic balance – the four colours of man – physical, mental, emotional and spiritual.
The dream catcher around the medicine wheel is the purpose of life. We’re all given a dream, a purpose, when we’re born, so we seek that out.
The West Coast full moon is a teaching I use with our women, to get them back into living healthy lives. They have a gift to keep our generations going. To do that they need to carry that seed and keep it pure. Grandmother moon controls the tides, the waters, on mother earth.  Our first journey is when our mother’s water breaks.
The wolf sings to the moon. It is a guardian spirit to the giver of life, the woman. It lets it’s voice be heard in thought, song and heart, and will appear when necessary.
The trees represent our sacred medicines on Mother Earth. If you pick a willow and trim the bark off, the third layer is a white skin. Let that dry and peal it off and you have our aspirin. Different trees provide different gifts. Sometimes we can use the roots or sap.
For our sacred medicines to grow we need water, earth, fresh air. Trees recycle the air. I sometimes ask kids, “Have you every been to Indian Walmart? Come to the river. Look at the water, fish, plants, the ground – deer and sea gull tracks, goose eggs, duck eggs, animals providing meat, feathers, fur.
There is a Closing moon at the bottom of the painting with the two feathers, representing man and woman. There is a prophecy – when man and woman come together, and learn to walk side by side again rather than behind and ahead, they will be like the eagle wings. Man and woman will give balance to life, and human beings will be able soar to the highest possibilities they’ve been given.
The bear paw (at the top) represents family.
The wolf paw prints (at the bottom) are heading for the lodge. The wolf, as a spirit guide, is always roaming through.
I use the the wolf headdress when I dance because the wolf is my spirit animal.