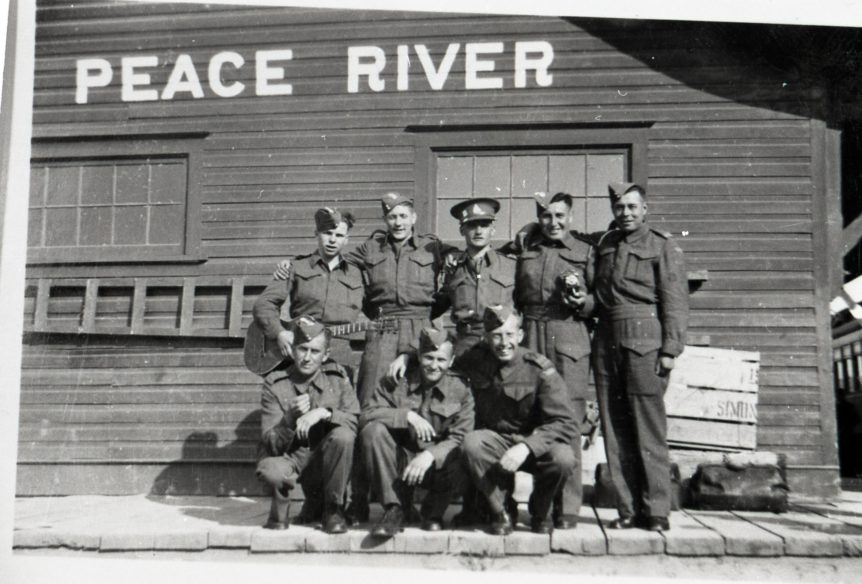 While I was putting the finishing touches on the story for the back of the “Peace Train” card I designed with the Peace River Museum, I was contacted by David Lawrence at Peace River High School and asked if I would sing the 1971 song, “Peace Train” (by Cat Stevens) at the end of their Remembrance Day service. I had just gotten out the music the day before to check the lyrics so I could put an excerpt inside this card, and I had played the song before for one of my singing students, so I said “Yes!” He also asked me to sing the brutally honest “Green Fields of France” to commemorate the 100th Anniversary of the end of WWI. It was a beautiful and grateful service. A couple of students also sang, which was a delight to hear. And they played a video of Loreena McKennitt singing “Breaking of the Sword”. As our son, Denver, is training as a pilot in the Royal Canadian Air Force, this song especially touched me. Also gripping was the story David Lawrence told of the 25-year-old Canadian Soldier from Nova Scotia, Pte. George Lawrence Price, who was killed by a German sniper in Belgium minutes before the armistice took hold 100 years ago on November 11, 1918.
One of the things that amazed me was the slideshow of 58 people from Peace River who have served their country so we could enjoy our freedom, including Métis soldiers, who are finally receiving the recognition they deserve along with other Métis veterans across Canada – No Longer Forgotten. Fred Sutherland, who grew up in Peace River, was one of the Dam Busters in WWII. His experience hunting birds with his father (a doctor in Peace River) made him an excellent gunner, and that was his role on one of the 19 Lancasters that went in to bomb the hydroelectric dams of Germany’s Ruhr River on May 16, 1943. Fred is now 95 and living in Rocky Mountain House. Here’s the CBC interview with Ted Barris, the author of Dam Busters. Here’s a link to more stories of Peace River veterans. In the photo above, Peace River soldier, Mike Hopkins, is second from the left in the back row (source: his neice, Sharon Low).
Doing the research for the card to commemorate the history of the Peace River Train Station and Northern Alberta Railway (NAR) has led me to conclude that we had our own “Peace Train” and a significant contribution to peace and liberty!
Our beloved station, built in 1916 and still standing and serving, was instrumental in helping WWI soldiers who wanted to settle and begin a new life in northern Alberta.
During WWII, when Japan invaded and occupied two islands off the coast of Alaska, the Peace River NAR Station was busier than ever, with hundreds of U.S. soldiers coming to work on the Alaska Highway and Canol Project to ensure essential fuel supply would not be interrupted. In 1942, the telegraph system was declared an “important artery in the defence program of Canada and the United States.” In 1943, the U.S. Army still occupied an office in the Peace River Train Station.
There is so much to the story of this historical building, and, of course, I couldn’t fit it all on the back of the card, nor could I include all of the great photos, so I’ll be creating another blog post, including the story of the Runaway Caboose in 1947, and lots more photos.
For this Remembrance Day post – “Out on the edge of darkness, there rides a peace train… Come on, Peace Train!” 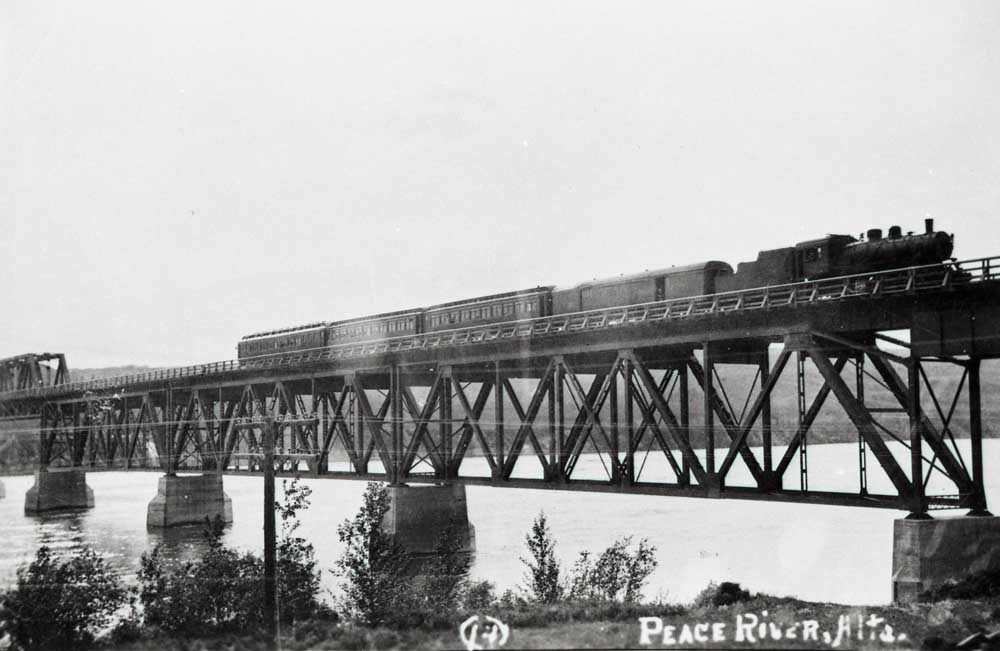 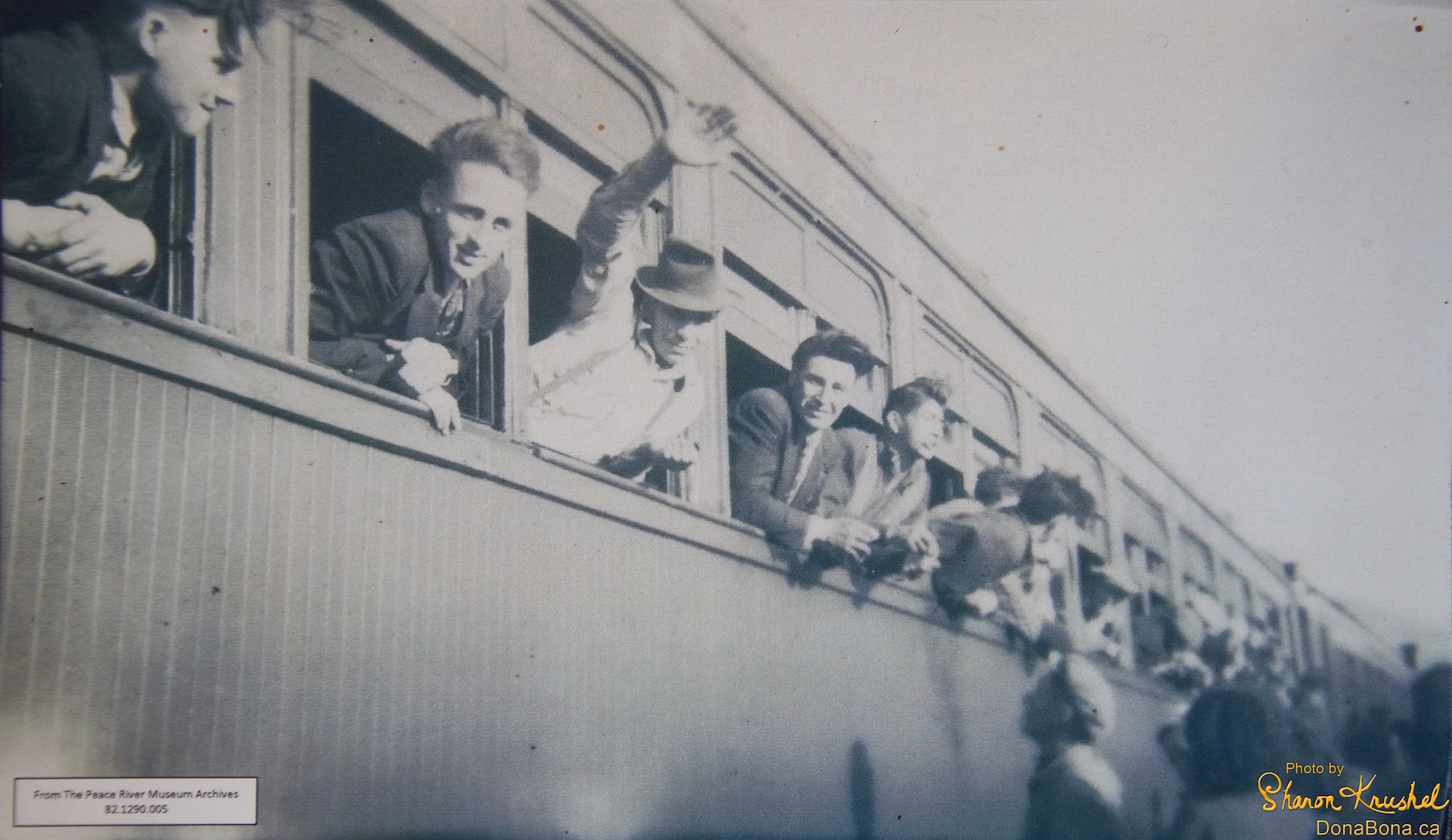 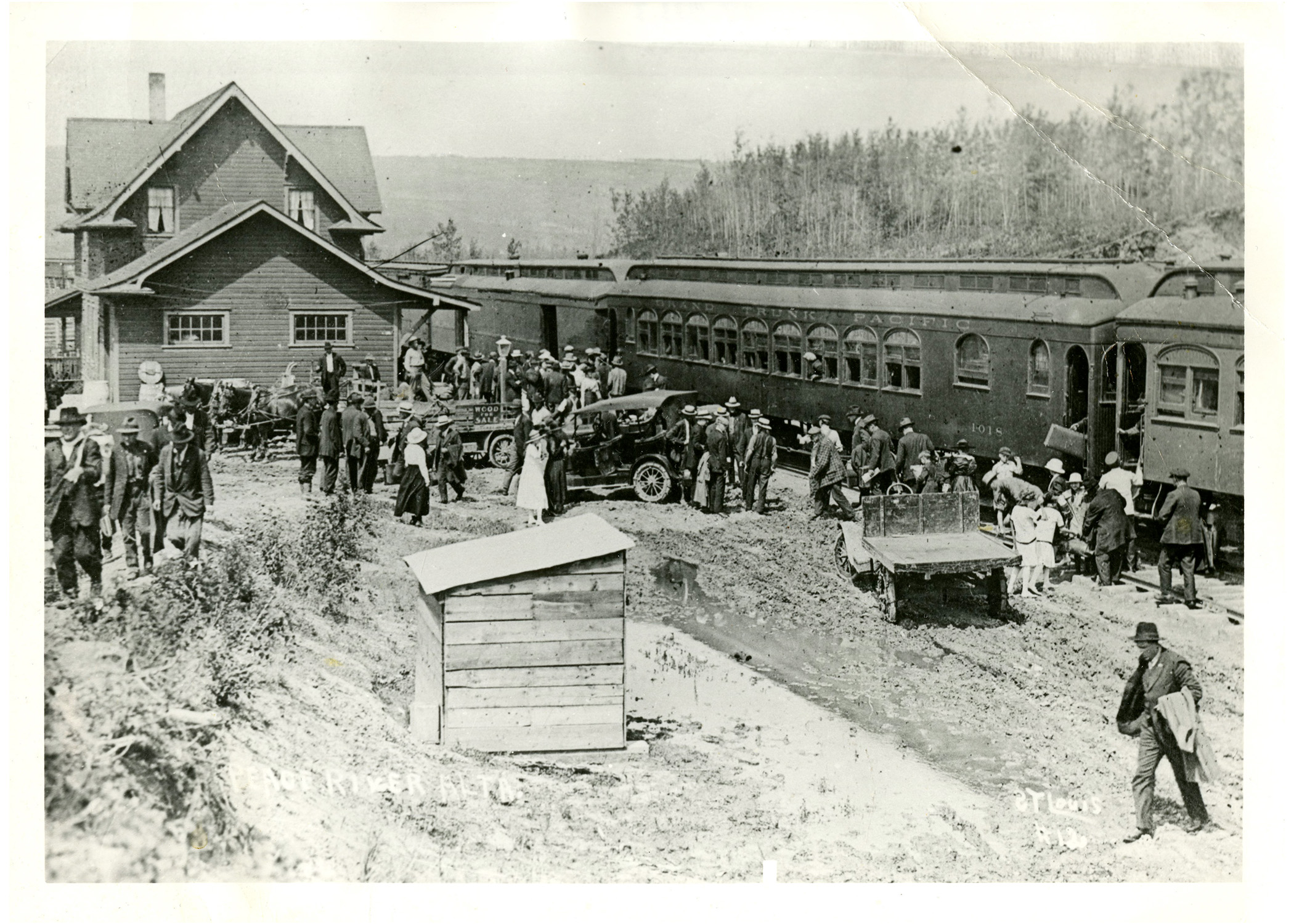 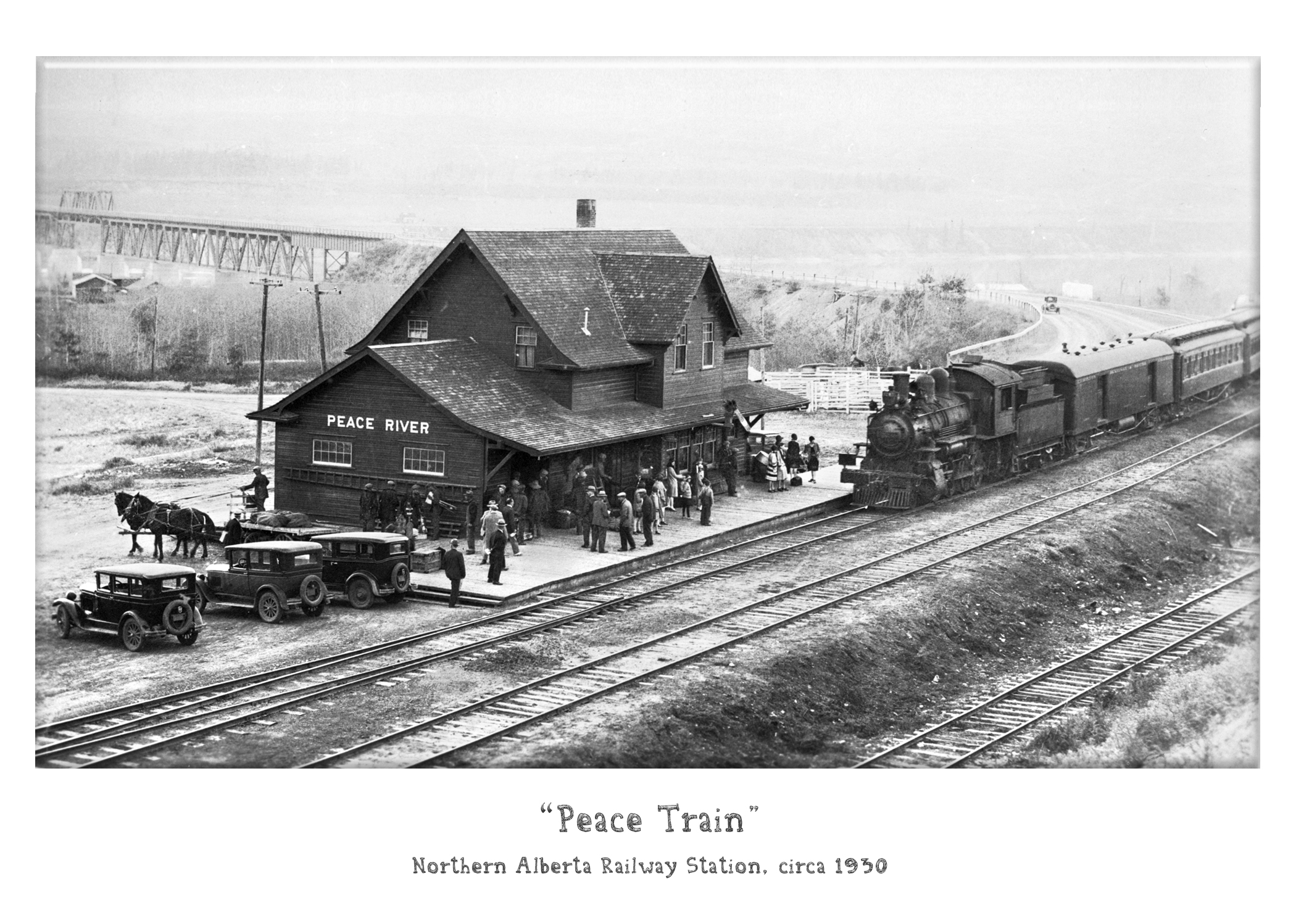 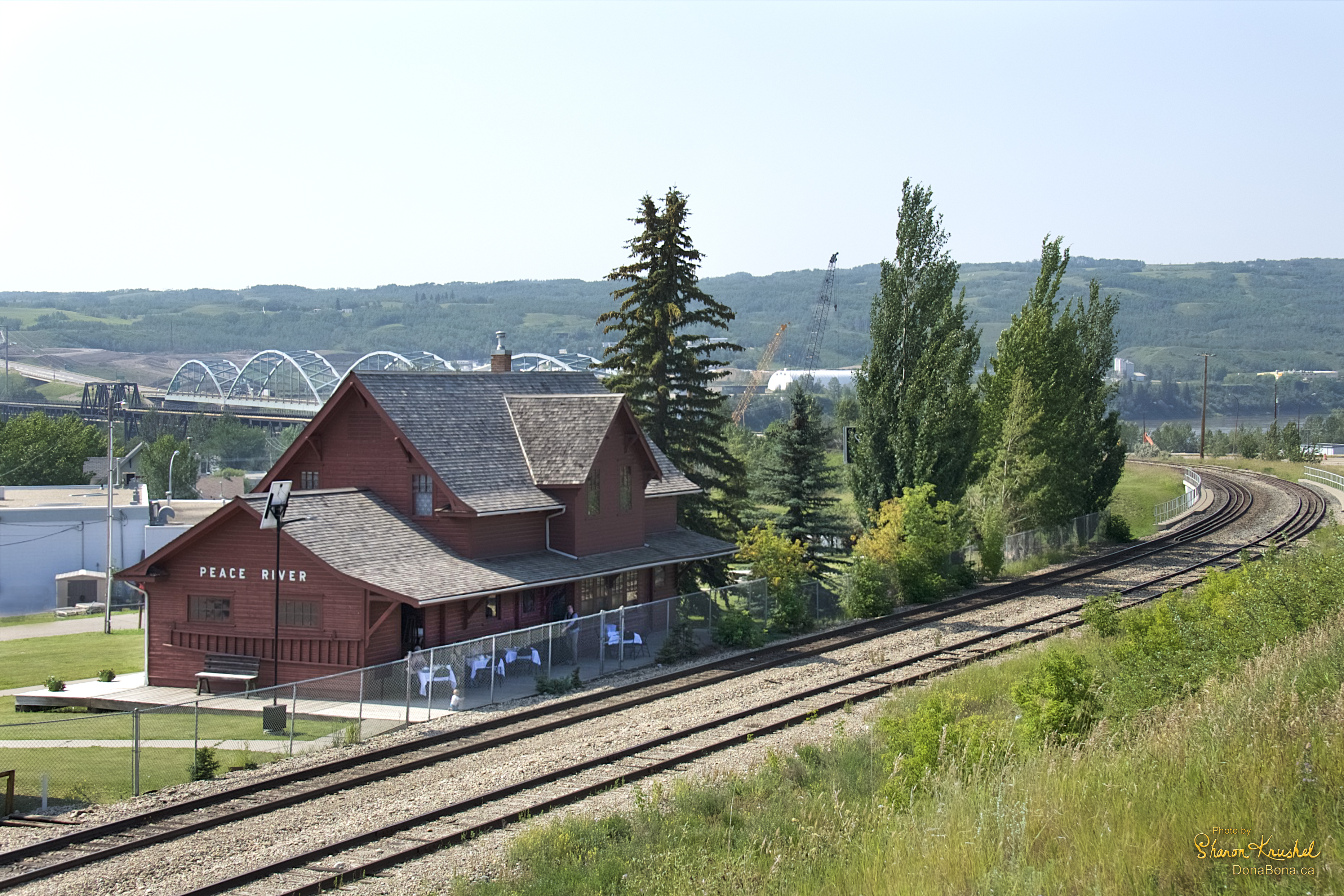 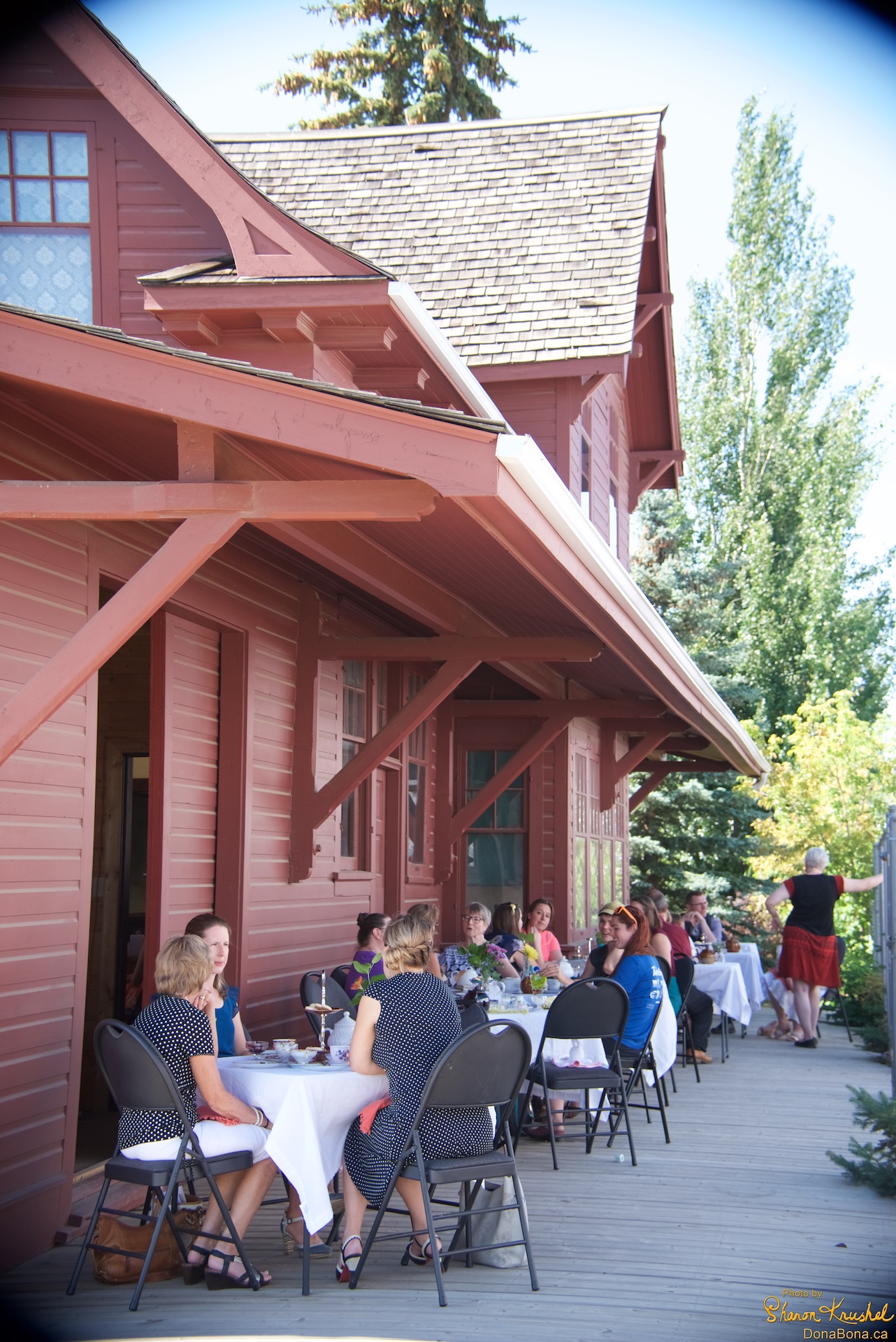 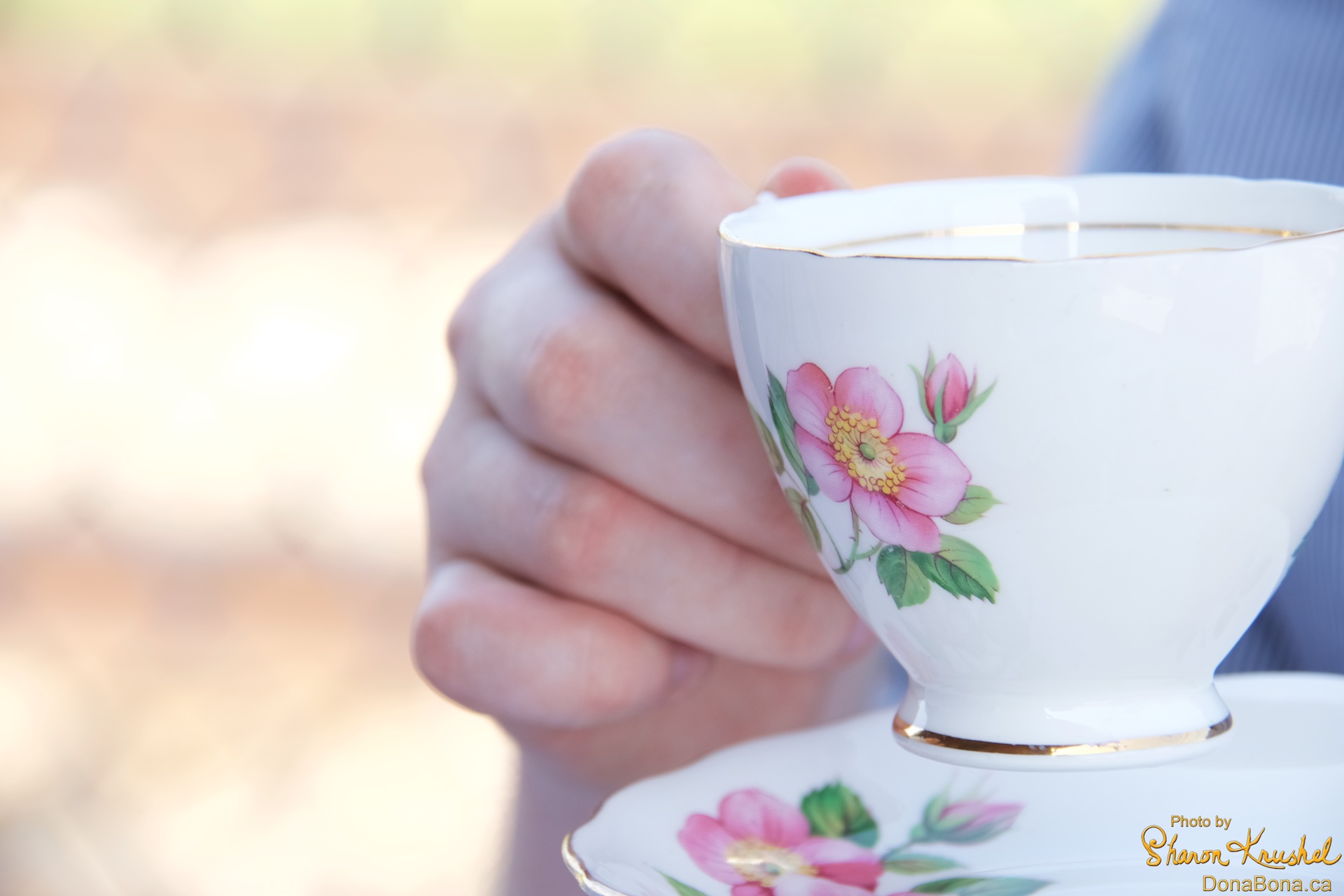 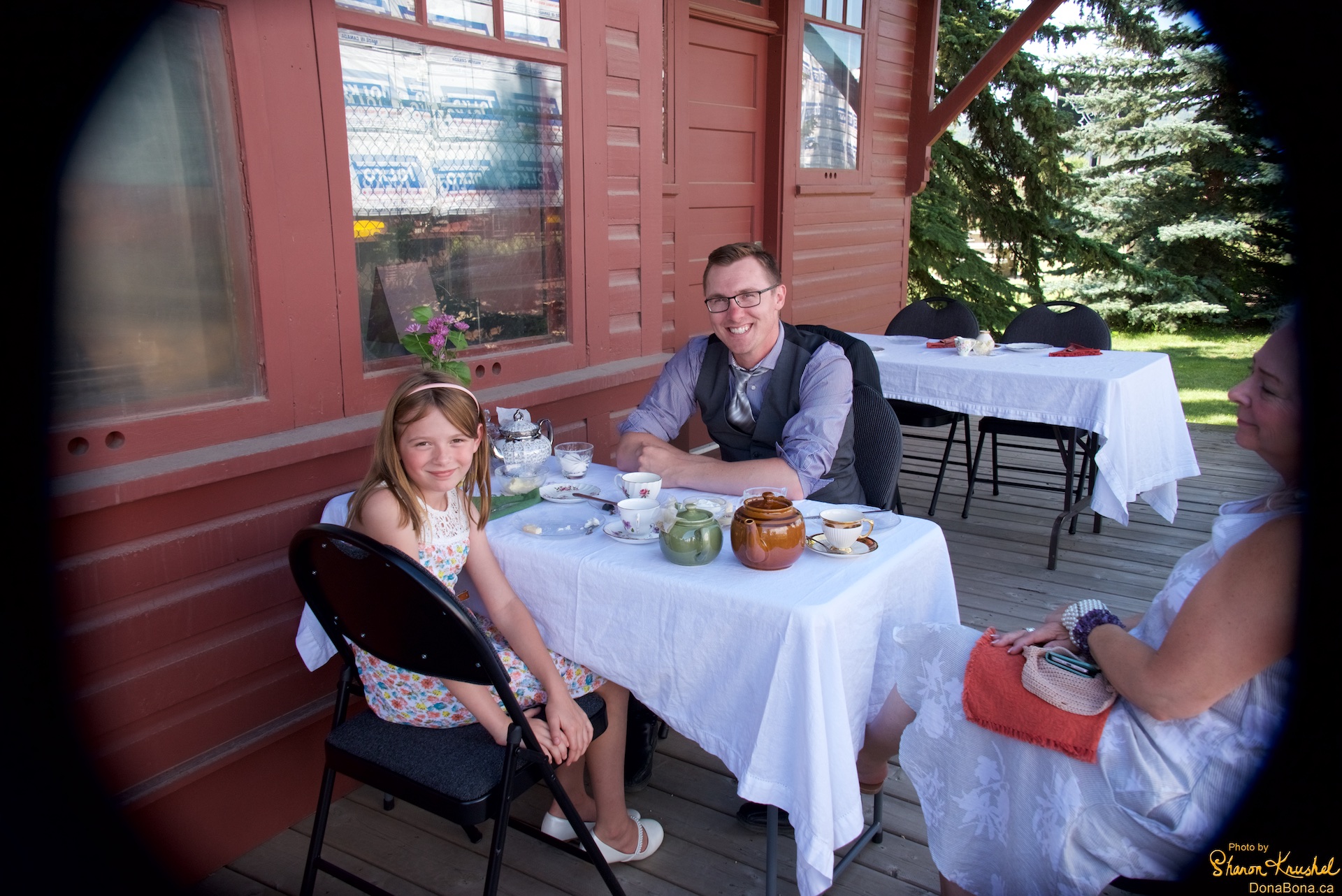 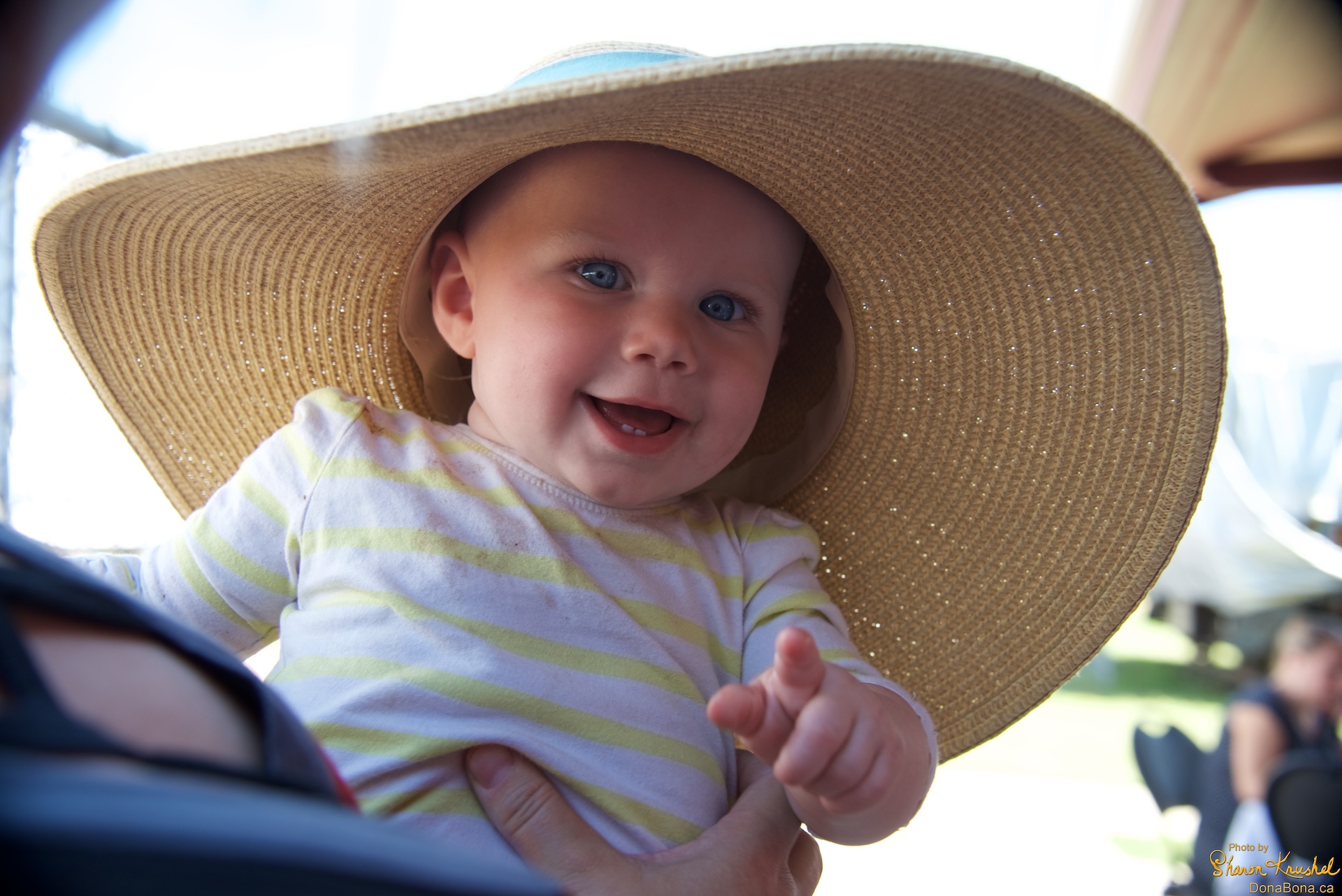 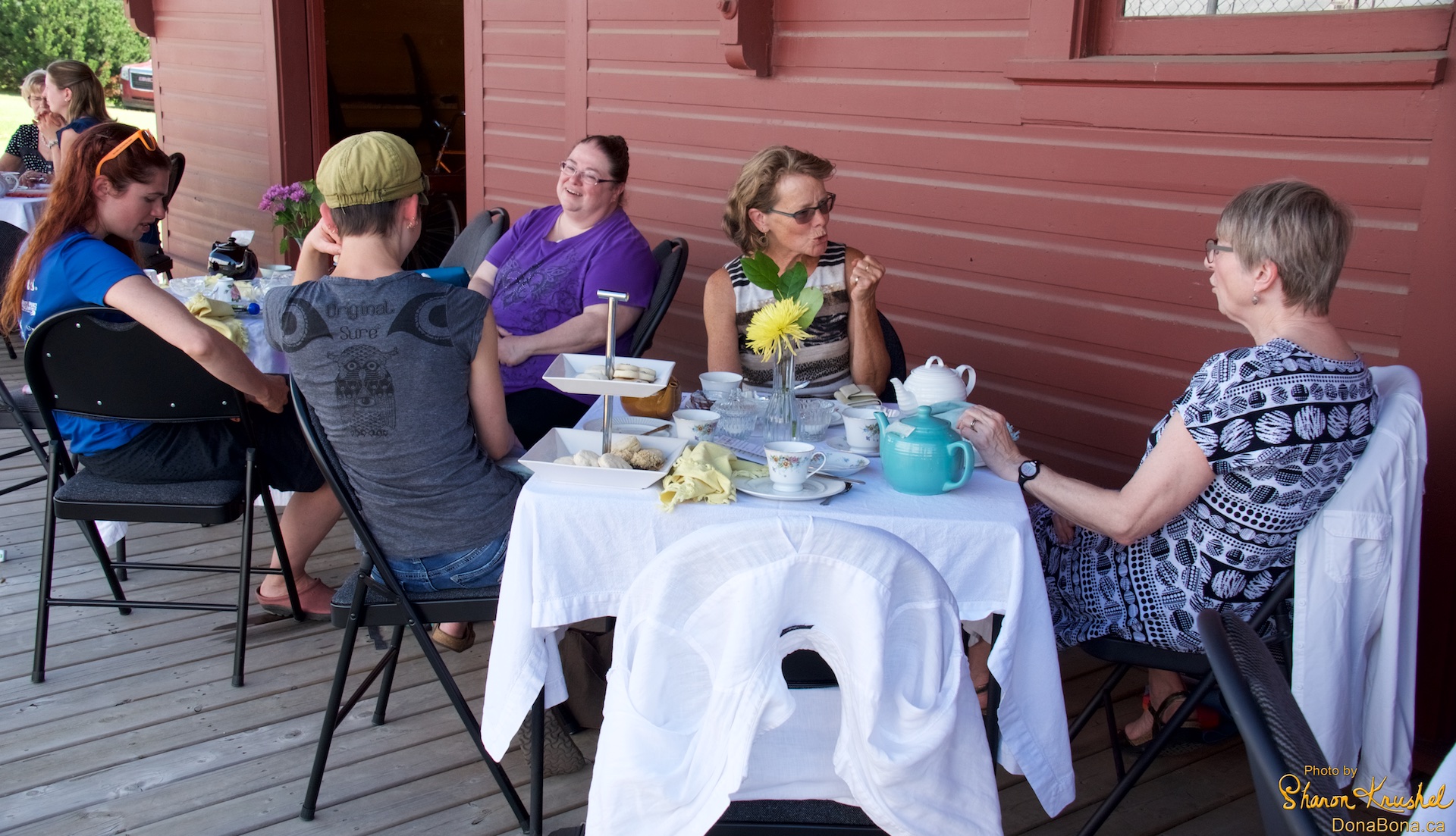 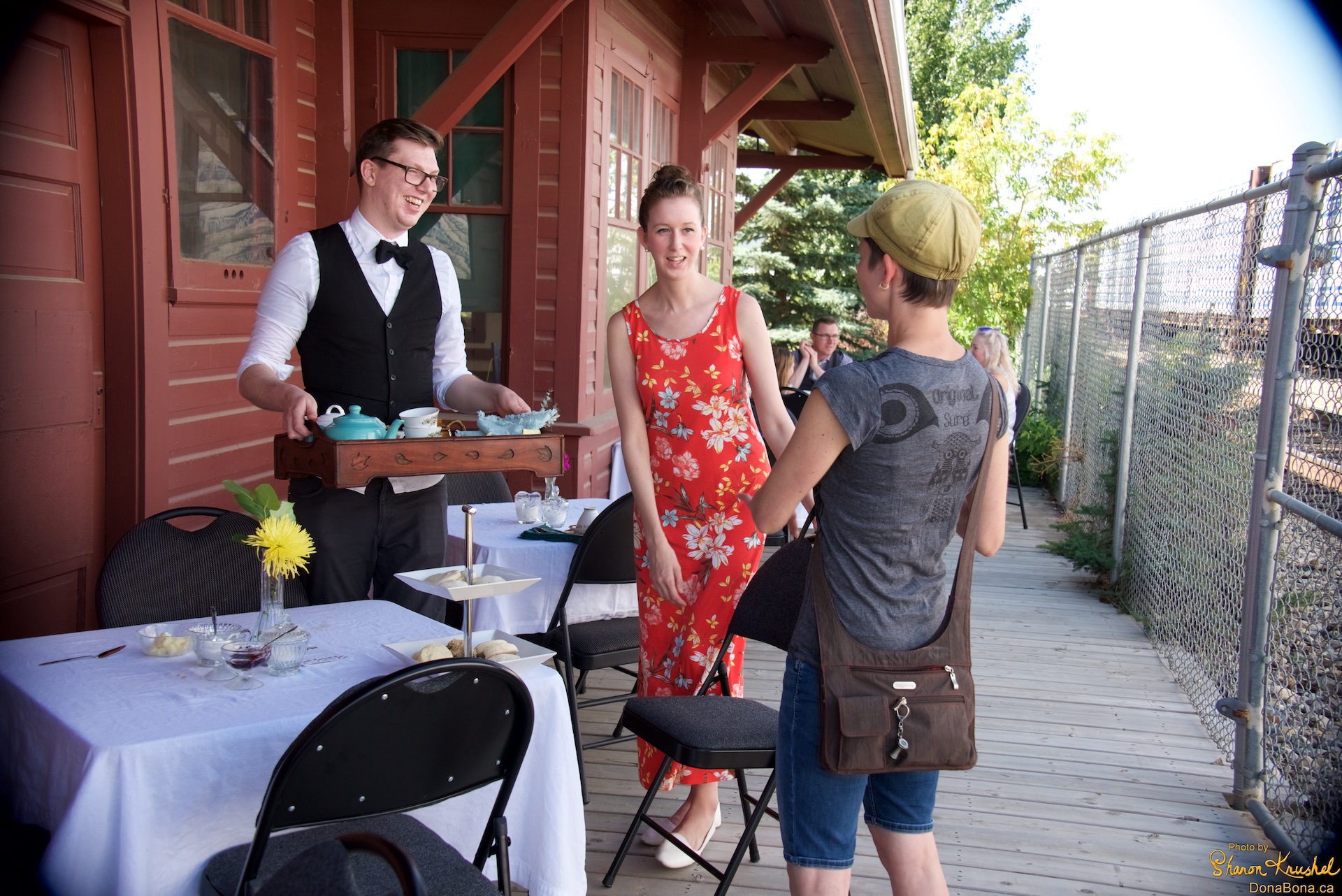