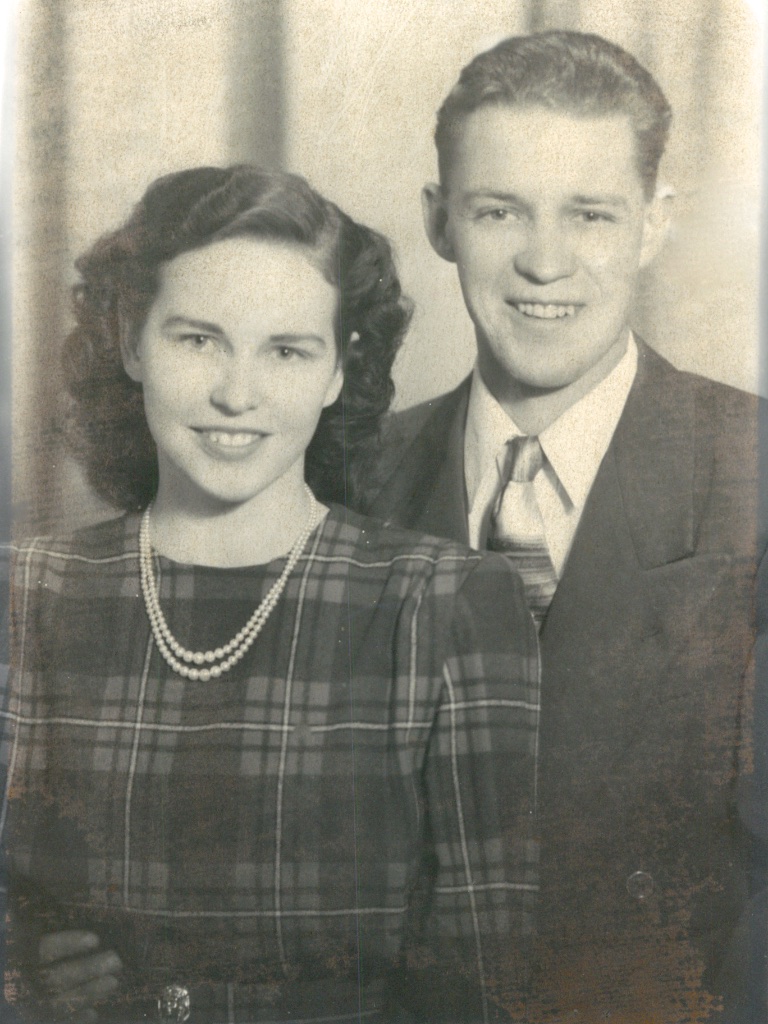 To write down a story is to create permanent, colourful evidence that a person lived and breathed, laughed and loved. We need to write more. Stories are important. Everyone has stories.
I invite you to submit a favourite story about your mother, whether she is young or old, alive or passed on to another realm. It can be a touching story or a funny story. Feel free to submit a photo as well. I’ll add your stories to this blog in alphabetical order according to mothers’ first names, and anyone can come and read them. Let me know here if you want to submit, and I’ll send instructions.
My mom, Merle Nakoneczny (pictured above on her wedding day in 1949), is now in her 80s, and I love listening to her stories, whether they are from decades ago, or from her heart attack episode on her 80th birthday. She says when she regained consciousness, she saw a really handsome doctor standing at the foot of the hospital bed. “Mrs. Nakoneczny, if this happens again, do you want us to revive you?” And she, trying to recover from the shock that he would ask such a question, responded, “YES!!! I have places to go and things to do!!”
Here’s a story I’ve been wanting to get down for a long time.

In the early 60’s, we lived in a little yellow house in Blackfalds, Alberta. (The house is still there, and it’s still yellow! I wonder if it still has a milk chute where the milk man used to leave those beautiful, tall glass milk bottles.) There was no basement to send the children to, only a root cellar, and, of course, there was no air conditioning. 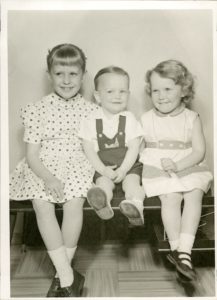 There were three of us children at the time, Shelley, me, and Harlan. We had some rambunctious cousins who lived up the street, George, Christine, Richard, and Clayton, and the neighbourhood kids loved hanging out at our little house because my mom was patient and a lot of fun.
On a particularly hot July day in 1962, my mother was great with child – “big as a house” she says – as she was expecting my little sister, Terry. There were too many children in one little house, doing what children do – running and squealing, letting flies in just before letting the screen door slam,  arguing over whose turn it was, or who was “it,” or who tagged whom, making the dog bark and the little ones cry… When the chaos and decibel levels rose to a screeching height, my patient, fun mother totally LOST IT!
No one remembers WHAT exactly she said; however, based on the pitch and volume of her voice alone, it became immediately apparent that it would be in everyone’s best interest to exit the premises pronto! Mom said there were kids flying out the front door and the back door at the same time, and the last escapee she witnessed was the dog jumping through the milk chute.
She looked around, saw that she was alone, at last, sat down on a kitchen chair, and “killed herself laughing.” The whole scene must have looked quite humourous from the outside as well. 🙂

For inspiration on the therapeutic and sociological value of telling your own and others’ stories, and ideas on how to get started, I heartily recommend a delightful little hardcover book, “Writing Down the Bones” by Natalie Goldberg. I have underlined, starred, and dog-eared many pages in my copy and have only dropped it in the bathtub once.